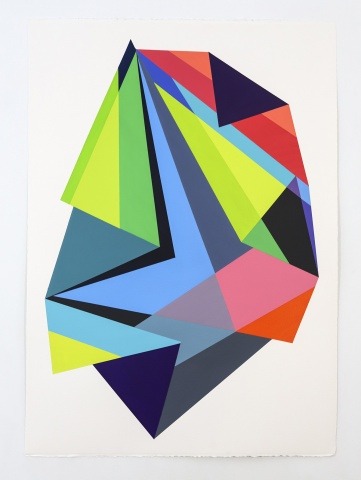 Galleri Urbane is pleased to host the third solo exhibition by gallery artist Rachel Hellmann. Titled Cross Fold, the show features a new series of Hellmann’s trademark shaped wood paintings alongside vibrantly colored works on paper. Through these two complimentary bodies of work, the artist explores the tension generated from discrepancies between perceived and actual space.

Central to Hellmann’s practice are the painted, sculptural wall pieces for which the artist has become known for. Meticulously crafted by hand, the work stems from her family’s history of carpentry and deep appreciation of craft. In a process that begins with cardboard maquettes, Hellmann constructs complex structures that fold in accordion-like forms. The works begin to dissolve boundaries between painting and sculpture as its profile juts out from the wall. Hellmann shapes our reading of these works through linear applications of saturated color that wrap and bend around each piece, often employing methods that trick one’s eye. Using varying hues to suggests shadows or the bending of a plane, Hellmann’s painted configurations come to be at odds with the work’s architecture, complicating one’s understanding of it and igniting a need for closer investigation.

A similar playful approach to perception is found in Rachel Hellmann’s works on paper. In these paintings, geometric shapes appear to float on the stark ground of heavy white paper. Hard edges of bright color define forms that are akin to those found in paper airplanes and origami. Hellmann pairs colors that lend the illusion of three dimensions as the shapes appear to project and recede from the picture plane. The forms found in each work on paper begin to converse when installed in groupings, suggesting subtle movement and kinetic energy.

The conversation between real and illusionistic space runs throughout the work in Cross Fold. The grey areas formed ultimately call for interaction with the work of art, encouraging inspection from all angles. This movement becomes an essential aspect of the art work, connecting the object and viewer in a direct way.